Zellwood Transport – ‘Transporting your five a day for over twenty years’ A company’s name will usually give some indication as to what they do, where they come from, or the people involved. However the name Zellwood Transport gives nothing away, including the fact that in 2015 it is celebrating 20 years in business.

Zellwood’s main office is located at the Turvey Business Park, near Donabate in North County Dublin. The transport office is conservative, modest and belies the impressive and striking livery the trucks display. The requirement for grandiose transport offices has never been an important factor when winning customers in Ireland. How the office operates is far more significant, and in Zellwood’s case the business is controlled by Logistics Manager, Patrick Quearney, Fleet Operations Manager, James Plunkett and Shannon Flanagan.

The company that now trades as Zellwood Transport Ltd, came about after a series of circumstances and events within the fresh produce sector back in the early to mid-nineties. An opportunity presented itself to the company’s Directors, Mark and William Flanagan and as William explained, to avail of this opportunity, “quick action was required which included the forming of a new company. The quickest way to form a new company is to simply buy one off the shelf. Normally when this happens the name of the shelf company is changed instantly to a preferred one. However in this case the shelf company’s name was Zellwood and it has remained Zellwood,” and Zellwood seems to fit.

Over the last twenty years the company has worked away quietly, simply concentrating on the job at hand without fanfare. What has brought Zellwood to the fore now is the expansion of its fleet with ten new tractor units from DAF Distributors Ireland (DDI), which will soon be joined by six new Krone semi-trailer fridge units. While the DAF XFs are 460 hp 6x2s, one of the combinations is a XF 510 Super Space Cab. This XF will become the canvass for a special 20th Anniversary celebration livery. 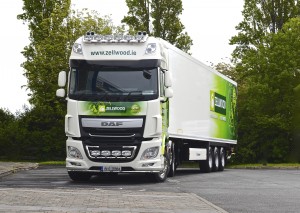 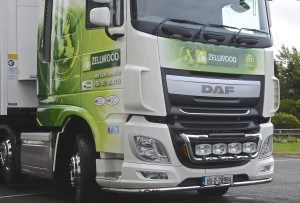 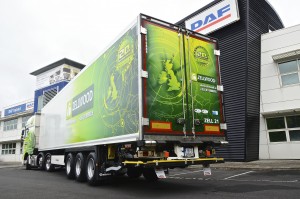 Above all, the transport of perishable foodstuffs requires reliability in terms of delivery times and consistency in product temperature, regardless of suitable recompense or restitution through insurance claims. The deterioration or spoiling of products reflects badly on all parties concerned, and ultimately the customer is let down. To ensure that all goes to plan, Zellwood lays down certain criterion regarding the equipment it operates. They operate DAF Trucks, Krone trailers, Thermo King fridges and D’hollandia tail lifts – all combining to get the best job done. In a similar fashion a full maintenance programme is completed through the main dealer on a contract service agreement.

Over the company’s twenty years Zellwood has always run a mixed fleet of vehicles comprising both rigid and tractor with no one marque dominating. However the company’s experience and its figures over the past fifteen years show that for Zellwood, DAF delivers the best all round performance. For this reason, when the need to acquire ten new units arose, the obvious choice for William and the team at Zellwood was DAF. The brand has performed reliably and the backup service from DAF has been first class. In addition as a percentage of Zellwood’s work is timed perishable imports from the UK, any breakdown or delay is unacceptable, so a strong dealer support network throughout Ireland and the UK is vital.

As with the majority of transport companies, Zellwood feels it is imperative that some form of telematics system be installed. The purpose being to help, monitor and advise with vehicle planning, and importantly to highlight operational efficiencies. After researching and evaluating a number of systems, Zellwood opted for the popular Blue Tree Systems, and William believes they made the right choice. Apart from the vast amount of in- depth data the Blue Tree programme can deliver, one particular function is valued highly – temperature monitoring. The system is set to send an alert to the office or the person on call if a fridge unit deviates more than two degrees from the original set-point. This allows the office to contact the driver, discover what the problem may be, and then take the required remedial action.

While the company does not have any difficulty getting and retaining staff, and in fact most of the drivers have been with the company for years, William recognises that there appears to be a growing shortage of skilled professional employees across many aspects of the transport industry – and particularly a shortfall of drivers. William also believes that the problem may get worse as the economy begins to lift. He notes that “another aspect discouraging new entrants to the industry is the high cost of getting a licence.”

However it is important for Zellwood to retain the skills inherent in the company, as it takes time for drivers to become familiar with the work and operate a fridge. To help with driver training, Zellwood has its own Approved Driving Instructor (ADI) on hand to evaluate newcomers and continually assess the permanent staff. Training is for the most part carried out in-house and so can be tailored exactly to the needs of Zellwood customers, although a number of the staff including Patrick and William have attended training courses dedicated to correct ‘double-deck’ trailer operation and roll-over prevention in the UK. Overall the company views the Driver Certificate of Professional Competence (DCPC) as a positive initiative for the road transport industry, and should deliver benefits – if not immediately, certainly in the long term.

Some of the training undertaken was demanded by its client base, which includes many of the most hi-profile names in the food industry and retail sectors, including Marks & Spencer, Tesco and Nature’s Best. Often it is the case that strict demands of the customer can shape the way a company develops and grows – and in general the better the customer the better the transport supplier has to perform. This has been shown to be the case in many other areas of transport. Pulling the double deck fridges for Marks & Spencer on behalf of Gist helps to ensure that appropriate attention to detail applies to the consignments throughout the transport. The same ethos then become inherent in the company and become the operational standard for all customer consignments.

Almost as important as delivering the goods, operators must also have the right certificates to back up what they claim they will do, and Zellwood can back up what it claims. The company can produce Certificates and Awards including ISO 9001 and ISO 14001 for Quality and Environmental procedures. Furthermore, the company can stand over its compliance ratings, and it is worth noting that Zellwood is one of the companies who invited the Road Safety Authority (RSA) to inspect its premises’ and quality procedures. Again as with most compliant hauliers, Zellwood calls for a more level playing field to be created by greater enforcement of the current regulations across the board for all operators.

So for the future what can we expect from Zellwood? It appears that expansion is on the cards and the company intends to develop some element of warehousing, and it would also like to explore work in the pharmaceuticals sector. Because Zellwood is currently running trailers on import/export work to and from the UK, there exists the possibility to increase the volume of this traffic. While there is no desire to venture further into Europe, these things can never be ruled out. Zellwood operates over thirty trucks, with access to approved and reliable sub-contractors to increase the fleet to forty-five if needed. The new additions will relieve some of the pressure the extra work has brought and create some capacity to develop the business further.

The company’s success over the past twenty years has been founded on its ability to develop transport solutions for other people’s problems. It is clear that it is the intention of the team at Zellwood Transport to keep solving people’s transport problems for the next couple of decades.